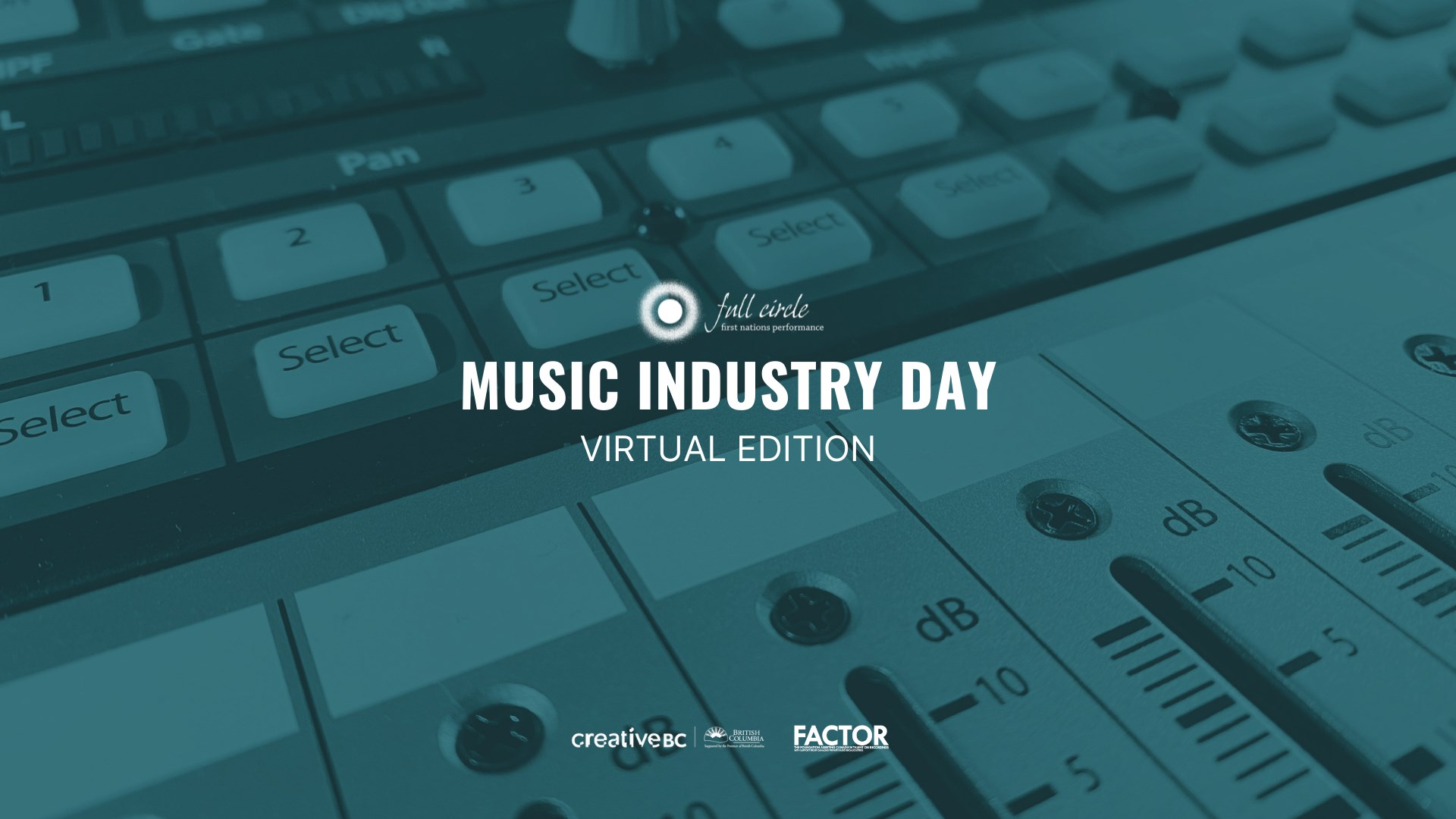 Join us for a virtual edition of our Music Industry Day on August 31st on Facebook Live. Designed for both emerging and professional musicians the topics will include

Join us for a virtual edition of our Music Industry Day on August 31st on Facebook Live. Designed for both emerging and professional musicians the topics will include bio writing, music curation, and tips for recording live streams. Full Circle: First Nations Performance’s music programming is supported by funding from Creative BC and FACTOR.
Meet the facilitators——————————————————————-

Kim Wheeler has brought positive Indigenous stories to mainstream and Indigenous media since 1993. She has carved out a career as a writer, publicist and producer across a variety of disciplines. Her audio work has been recognized by the New York Festivals, ImagineNative, Indigenous Music Awards and Prix Italia. Currently, Kim works from her treehouse media office with multiple clients in publicity, magazines, film and podcasts. She also hosts The Kim Wheeler Show on SiriusXM’s The Indigiverse, channel 165.

Elaine Bomberry is Anishinabe and Cayuga, from Six Nations of the Grand River Territory, in southern Ontario. She has worked as a freelance Indigenous Performing Arts activist/promoter/manager/TV and radio producer full-time for 34 years. She now makes her home on the Capilano Rez, on the unceded Squamish Nation territory in North Vancouver, British Columbia, for the last 15 years.

Full CircleFull Circle: First Nations Performance is a non-profit society and registered charity that creates opportunities for Indigenous artists. Margo Kane (Cree/Saulteaux), an interdisciplinary artist and Indigenous arts leader, founded Full Circle in 1992. Upon establishing Full Circle, Kane's vision was to make a profound contribution to the development of Indigenous performance in Canada. In 2018 Full Circle: First Nations Performance launched the Múyuntstut ta Slúlum Live Series. The Múyuntstut ta Slúlum Live Series aims to offer learning and career-enhancing opportunities to Indigenous musical artists through the sharing of ideas and knowledge and through the exploration of contemporary Indigenous music. Múyuntsut ta Slúlum comes from the Squamish Nation and means ‘to submerge/sink/immerse yourself in songs/music’. It is an open invitation to music industry professionals, established, emerging and aspiring, to work in reciprocity and from a strengths-based perspective to support and ensure the ongoing development of Indigenous music. This series has been supported by funding from Creative BC, FACTOR and SOCAN.info@fullcircle.ca #416-268 Keefer Street Vancouver, BC V6A 1X5