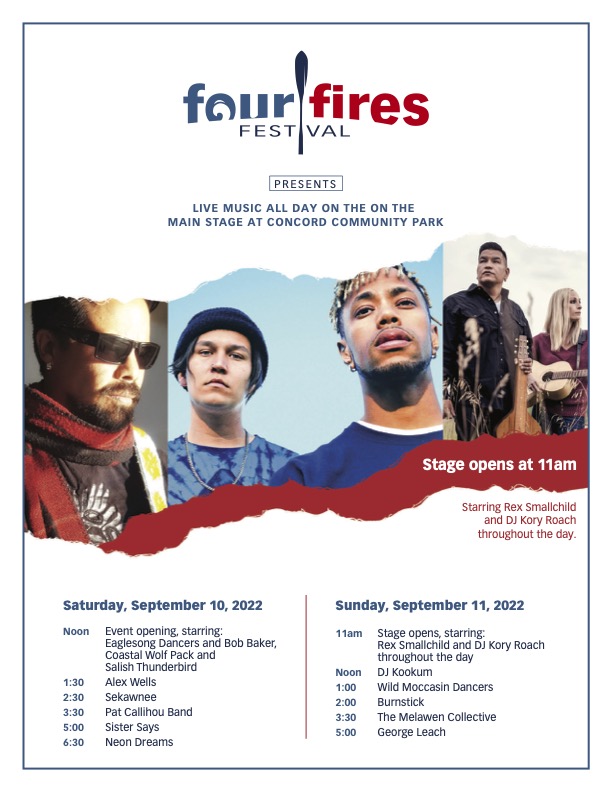 The Main Stage will showcase Indigenous Artists, including headliners, and performances will be showcased virtually after the festival has closed its gates. Official Indigenous canoe races have

The Main Stage will showcase Indigenous Artists, including headliners, and performances will be showcased virtually after the festival has closed its gates.

Official Indigenous canoe races have not been held in False Creek for over 100 years, but that will change when we present the Four Fires Festival canoe races in September, 2022. Teams from up and down the west coast of North America will join for a weekend of celebration when the canoes return to race once again. Multiple age categories, from children to elite athletes will compete in the heart of downtown Vancouver as they strive to push the limits of human performance.

To be held at the Concord Community Park, the Four Fires Festival will also contribute to ongoing collaboration between multiple visual, performing and culinary artists and to demonstrate that in British Columbia, everything is connected.

The number four is sacred to many Native North American tribes as it represents the four seasons, the four human needs – physical, mental, emotional and spiritual, the four kingdoms – animal, mineral, plant, and human; the four sacred medicines — sweetgrass, tobacco, cedar, and sage.

To the Native North Americans, fire was like a messenger and a gift from their great spirit. The smoke of the fire was used to clean sacred items such as drums, shakers, and pipes before the use of them during ceremonies and rituals.